Whether you’re new to Spinning®, just downloaded one of our motivating apps like Spinning® Connect™ or Spinning® Digital Plus, or simply need a refresher on all those numbers on your console, below is our user-friendly guide to your cycling metrics.

We’re calling this a guide, rather than a glossary, because the terms are not in alphabetical order. Rather, it starts with the basics and builds from there—much like the way you would progress in a Spinning® class, starting with the warm-up.

We hope this helps you to understand your performance, track your workouts, and put your data to good use as your rack up your fitness gains. 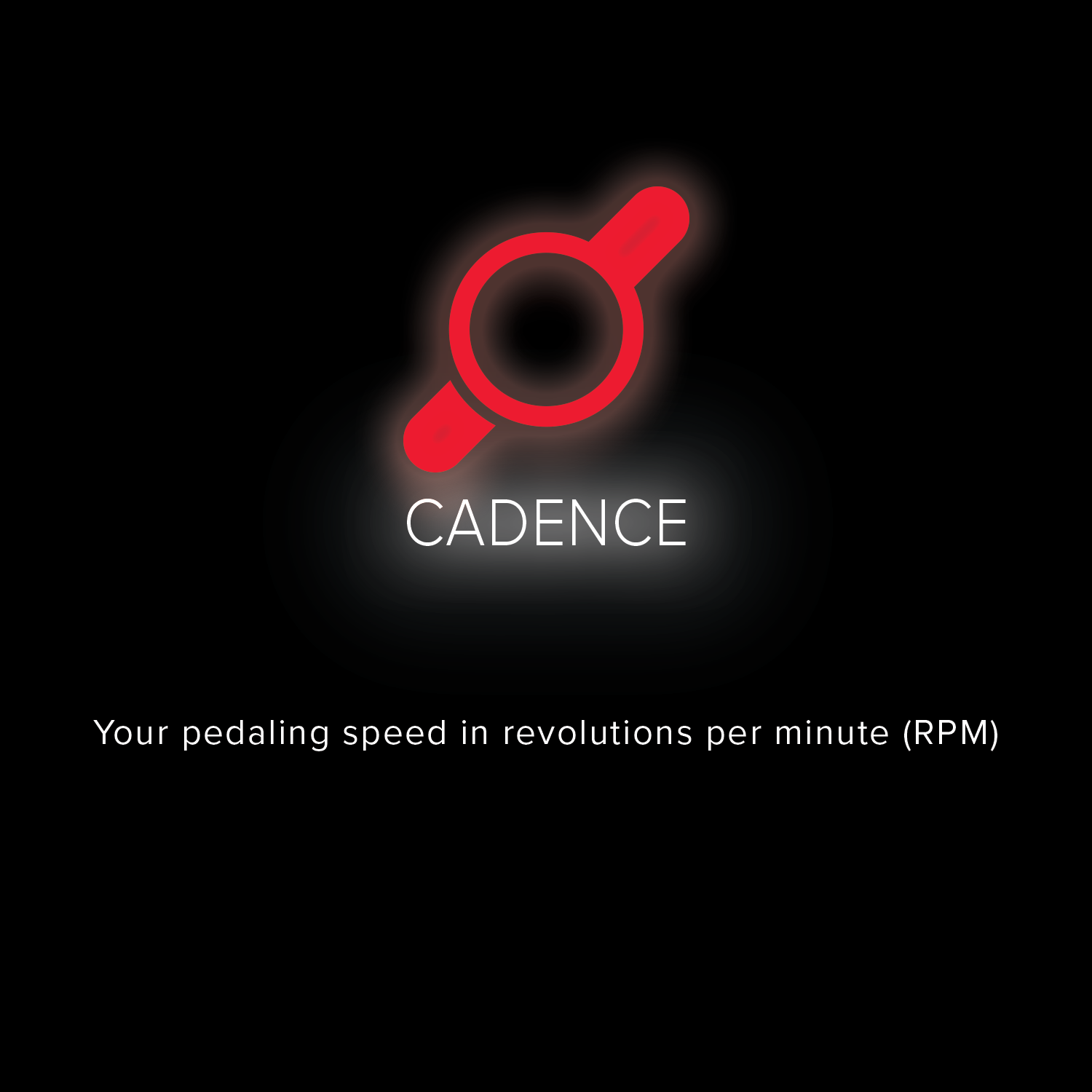 Cadence is pedaling speed—the rate at which you’re pedaling, expressed in revolutions per minute (RPM). In the Spinning® program we ride at realistic cadences—comparable to how you would ride an outdoor bike. As a guideline, on a flat road you’ll pedal between 80-110 RPM, and on a hill your cadence will slow down to 60-80 RPM. Of course, in Spinning® there are no real “hills” but by turning the resistance knob you make it harder to pedal, which creates the feeling of climbing uphill. This combination of resistance + cadence is how you control the effort and intensity of your ride. Monitoring and measuring the effort and intensity comes into the picture with heart rate and power metrics.

Your heart rate provides information on your exercise intensity. It’s an indirect measure of intensity, but it’s still a good way to gauge how hard you’re working and whether you’re in an aerobic or anaerobic zone. An armband or chest strap heart rate monitor will transmit instant, continuous heart rate data that keeps you in check with your training goals. 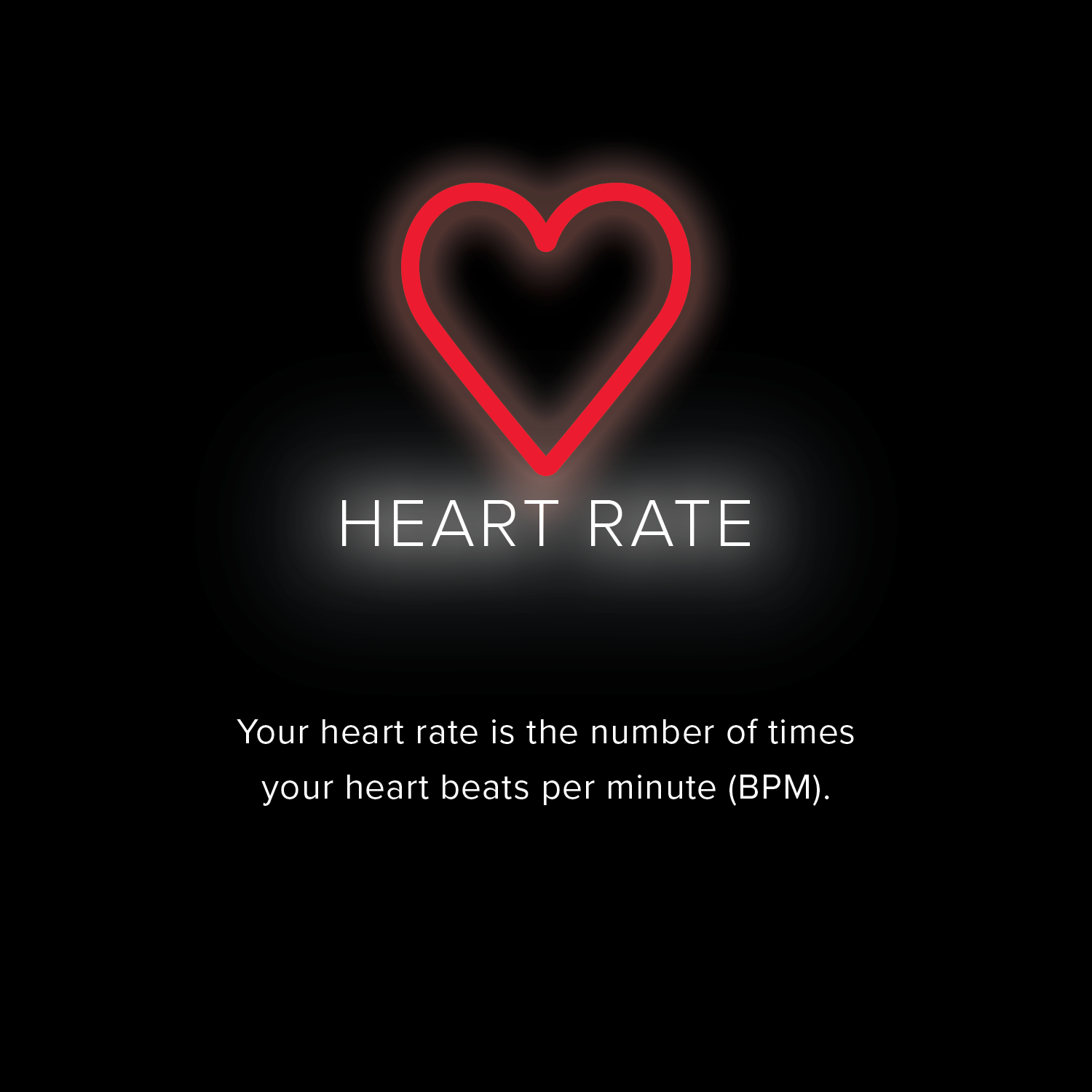 Heart Rate equals the number of heart beats per minute. As exercise intensity increases, your heart rate increases (beats faster) to supply more oxygen to the working muscles. For example, when you’re just warming up on the bike, your heart rate might be 90-100 BPM, and during a more intense effort it might increase to 125-150 BPM. What should your target heart rate be during a workout? That’s where training zones come into the picture. Training zones classify aerobic, threshold, and anaerobic training, based on percentage of maximum heart rate.

Try it: Put on a heart rate monitor and take note of your heart rate at rest. Watch how it climbs during activity, and then watch it come back down when you recover.

Max Heart Rate is the estimated maximum number of times one’s heart can beat in a minute. We use this benchmark so that we can make sense of what our heart rate means to us individually. In very simple terms, the more intensity in your effort, the closer you get to your max heart rate. When you wear a heart rate monitor during exercise, rather than focusing on the actual BPM number, you focus on the percentage of your max heart rate. So how do you know what your maximum heart rate is? It’s not considered safe or realistic to just go all out with some intense workout to see how high your heart rate can go, so instead we use this age-based formula to estimate it: 208 – (.7 x age).

Try it: Multiply your age by .7 and then subtract that number from 208.

% Max Heart Rate is themetric that translates the absolute number into a relative one. A Spinning® instructor would never coach a class to get their heart rates to a specific number like 125 BPM, because that number could represent an easy intensity for some people, and a hard effort for others. Instead, instructors cue riders to aim for certain zones, which are based on % Max Heart Rate.

Try it: Wear a heart rate monitor and ride with the Spinning® Digital Plus or Spinning® Connect™ app. Throughout your workout you’ll see what zone you’re in, based on your age-predicted max heart rate. No need to memorize numbers or do the math!

Power, expressed in watts, is a direct measurement of how much work you’re doing. Using a bike with a direct power measurement will tell you exactly how much force you’re putting onto the pedals. How is this different than using a heart rate monitor? A heart rate monitor will tell you how your heart rate is responding to exercise. Your heart rate will also respond to other factors like caffeine, stress, lack of sleep and more, whereas power is the most objective measure of exercise intensity. 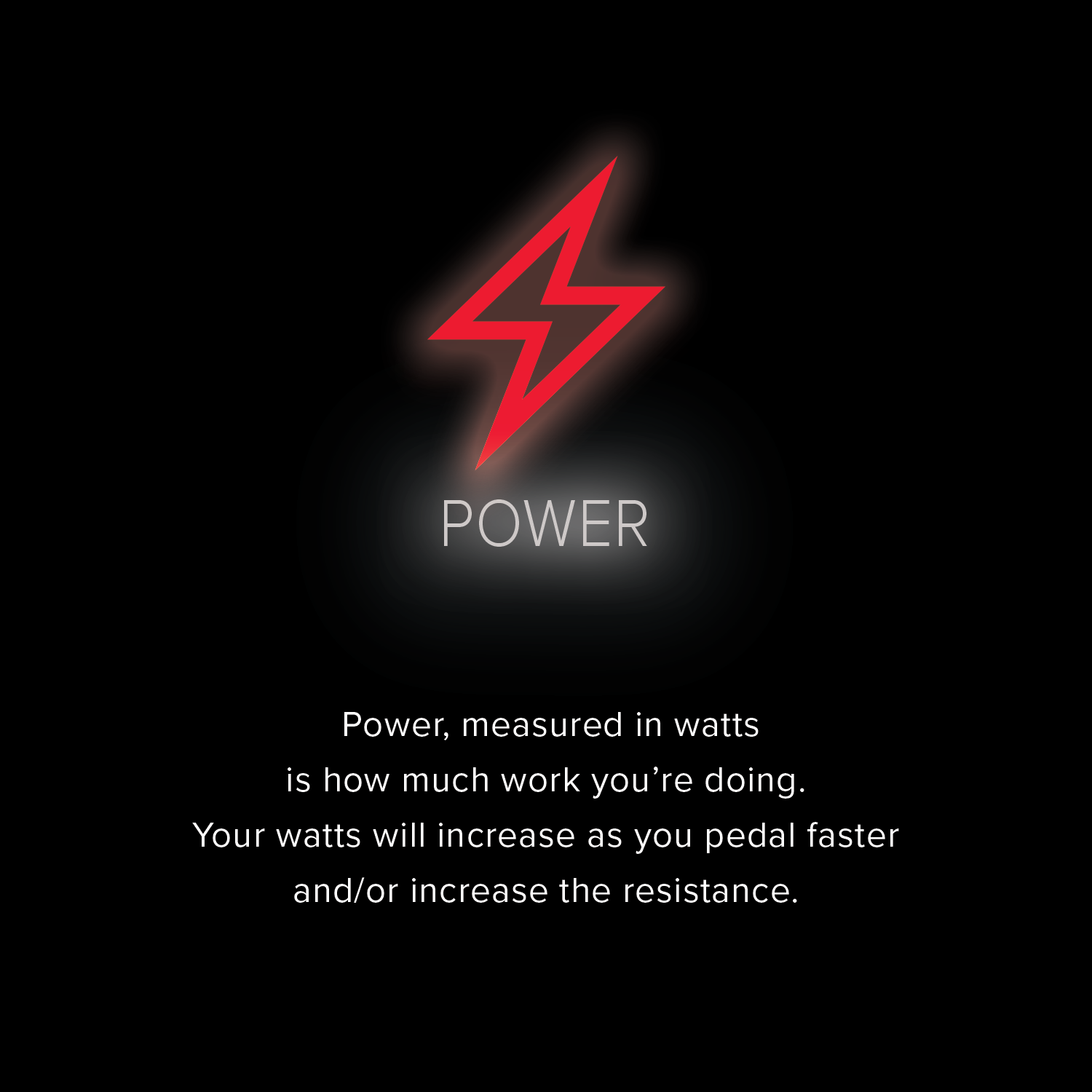 Watts are the units of power. Just as water is measured in gallons or liters, power is measured in watts, which measure the rate of energy used in joules per second. When riding a bike with SPINPower® technology, you’ll see your watts displayed in real-time on the bike’s computer or your app. As you work harder by pedaling faster and/or turning the resistance up, you’ll see your watts increase.

Try it: Warm up on the bike and notice the range of watts on your screen. Try a variety of increased efforts and observe how your watts increase as you put more force into the pedals.

Watts/kg (W/kg) represents your power output divided by your body weight in kilograms. Generally speaking, if you take two people who are both fit, but one is heavier than the other, the heavier person will have the ability to put more force into the pedals, and therefore the number of watts they see on the screen will be higher. Let’s say you and a friend do the same ride on the Spinning® Digital Plus app, and at the end of it you feel like you really gave it your best effort. Your average power for the ride was lower than your friend’s. Does that mean you’re not as strong? Not necessarily if your friend is heavier than you. W/kg takes bodyweight into account and creates a power-to-weight ratio that allows comparison on a level playing field. For example, if Jane weighs 120 lbs. (55 kg) and does a workout with an average watts of 136, her W/kg = 2.5. If Joe weighs 190 lbs. (86 kg), he needs to average 216 watts to get to the same power-to-weight ratio of 2.5 W/kg.

If you race, either in outdoor rides or on Zwift, W/kg comes into the picture in terms of categorization and position compared to other riders. But even if you’re just focused on your own rides, tracking your W/kg can be useful to see if you’re getting stronger in your rides. And don’t worry—there’s no need to convert pounds to kilograms or do any math. Any app that includes watts/kg will do the calculations for you.

Try it: Do a ride on a power bike with the Spinning® Connect™ app, and you’ll see your watts/kg in your ride summary. You can also find online calculators on the internet.

PST stands for Personal Spinning® Threshold. It serves the same purpose as Functional Threshold Power (FTP). PST is a threshold marker that identifies your aerobic ceiling. It’s the highest level of exertion you can maintain before entering anaerobic metabolism. The PST ramp test is designed as a tool that anyone can use on a Spinner® bike. It’s a safe, sub-maximal method that is easy to control and replicate. Once you know your PST, you can then determine your SPINPower® training zones, which are based on percentage of PST. If you don’t know your PST, you can also use average power and peak power as benchmarking metrics.

Try it: Use the Spinning® Connect™ app to do a guided PST Test. Tap the Gear icon, and then select Structured Workouts > Fitness Assessments > PST Assessment.

Average Power represents your average power output over a period of time. The SPINPower® computers and apps will display your average power in addition to your current power throughout your ride. The apps save this information in your workout history so that you can track it over time and use it as a way to benchmark and set goals.

Try it: Use the Spinning® Digital Plus or Spinning® Connect™ app while riding on a power bike. You’ll see your average power displayed throughout your workout as well as on your workout summary screen.

Try it: Use a Spinning® computer with an interval function or use a stopwatch along with the Spinning® Digital Plus or Spinning® Connect™ app. Hold the hardest effort you can maintain for 30 seconds and take note of your average power for that interval. That’s your 30-second peak power.

Kilojoules (or kJs) represent energy expenditure. One kJ = 1,000 joules. Since a power meter measures the wattage generated, it tells us the accurate amount of energy (aka calories) expended, expressed in kJs. Without a power meter, other fitness devices and apps will provide an estimate of calories burned, but that estimate is usually based on a formula that is too generalized to be accurate, and most often it gives us inflated numbers. This is one of the key benefits of using an accurate power meter like a Spinner® Chrono® Power bike or a SPINPower® crank—you’ll be able to see your total kJs for a workout, which is equivalent to the number of calories burned.

Try it: Do a workout on the bike using the Spinner® Chrono® Power or a power bike with the

Spinning® Connect™ app. Check your total kJs in the ride summary. You can increase the number of kJs (calories burned) by riding longer and/or with more intensity and effort. Try setting a goal for the total kJs you want to achieve each week.

Now that you know your metrics just like your ABCs, dial in your ride with our Apps and Sensors today!