One exceptional metric to track on your Spinner® bike is how much power (in watts) you’re putting out in real-time throughout your ride. Why, you may ask? Power gives you a direct, immediate measurement of how much work you’re doing. This means that it also tells you the true amount of calories you’ve burned in a workout. Huge benefits right?! But did you know that to truly train with power there’s an important step you must take? You need to know your Personal Spinning® Threshold (PST).

Personal Spinning® Threshold (PST) is a marker that identifies an individual’s aerobic ceiling. It’s the highest level of exertion you can maintain before entering anaerobic metabolism. If you’re familiar with Functional Threshold Power (FTP), this is a similar concept. PST is the Spinning® program’s version of threshold, and the PST test is designed as a tool that anyone can use on a Spinner® bike. It’s a unique, safe, sub-maximal method that is easy to control and replicate.

What’s the Benefit of a PST Test?

A PST test empowers you to train within individualized zones. It’s not enough to know that you’re putting out 150 watts—you need to know what that number means for you. For some people 150 watts represents a moderate, aerobic effort. For others, it’s the high end of the anaerobic zone. Knowing your PST allows you to train smarter, because you’ll know when you’re riding in aerobic, threshold, or anaerobic zones. PST reflects the point where the exertion begins to produce the highest sustainable effort, challenging your strength, speed and stamina.

How Do You Determine Your PST?

You can determine your Personal Spinning® Threshold (PST) with a PST ramp test. You can do it on your own with the Spinning® Connect™ app, or a certified SPINPower® instructor can coach you through it.

Regardless of whether you do it on your own or with an instructor, below is a step-by-step guide so you have a sense of what you’re getting into. Essentially, you’ll first follow these PST test instructions and then find your SPINPower® Zones (also noted below) to start training with power! To really get educated on the science of training, SPINPower® Zones™, and power-based training rides check out the SPINPower® Certification, available online and in a live workshop format.

The objective of the PST Test is to identify the average watts you can sustain in a 2-minute effort with a steady cadence at a Rating of Perceived Effort (RPE) between 7 and 8 on a scale of 1-10. To get there, you conduct a ramp test, starting at a very low workload and progressively increasing effort by adding resistance at ramped stages.

1. Warm up at an easy pace for 10 minutes, shifting through different resistance loads and incorporating a few 10-20 second hard efforts. Also include some transitions in and out of the saddle. When the test begins, you will stay seated in the saddle.

2. At the end of the warm-up, dial in light resistance and find a cadence between 60-110 RPM that you want to maintain throughout the entire test.

3. You’ll cycle through a series of 2-minute ramps, each one a little harder with increased resistance. The Spinning® Connect™ app will record your average watts for each 2-minute ramp, and then you’ll turn up the resistance for the next ramp (aim for an increase of 5-30 watts). It’s important to keep your cadence steady throughout the test.

Ramp 1: RPE = 1 (Easy) for 2 minutes. From this point forward, each time you start a new ramp, keep the cadence steady, but add a little resistance to reach the next level on the RPE scale.

4. In the next 2-3 ramps, the goal is to reach Very Hard on the RPE scale, but not to go full-out. The goal is not to see how high you can get your watts. The goal is to identify the average watts you can sustain for a 2-minute, Very Hard effort while still maintaining a consistent cadence.

Results: The PST value is the average watts for the final 2-minute effort in which you were able to maintain your cadence at a perceived effort of Very Hard to Very, Very Hard.

What Your PST Means

Once you know your PST, use the SPINPower® Zone Chart to identify your training zones. To do so, find your PST number in the yellow column labeled PST. That row in the chart shows the watts that correspond to each training zone.

For example, look at the picture below. If your PST is 120, your SPINPower® Zones would be: 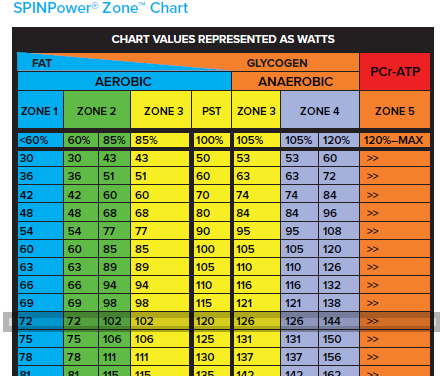 As fitness level and pedaling efficiency increase over time, repeated future tests will naturally occur at a higher, more consistent cadence, and increased wattage. Fitness conditioning and performance will show in future PST tests. An increase in PST can mean a change in SPINPower® Zones™ has occurred as well.