By Christina CastañedaWhen a collision with a truck left Carlos Yeguez in intensive care in 1994, his parents and family members were all by his bedside preparing to say their final goodbyes. Carlos’ entire face had fractures; he needed screws implanted in his lower jaw that was broken in four parts, had the loss of a third of the anterior tongue and needed a tube placed in the trachea to the small intestine. Carlos gestured for a pen and paper to write. He scribbled, “Today I’m not going to die.”After he was released from the hospital weeks later, Carlos moved back to the house where he had lived since he was six years old. Now legally blind, he began to recognize the home from a different perspective. Using his photographic memory, he was able to visualize the space where he grew up remembering the details of the hallways, the furniture, everything detail in the home, even the door ways.

A New Vision for Spinning® Program

As he began his rehab, he learned how to walk with a cane, how to read braille and began to adjust to completing basic tasks until he became independent once again. As a former martial arts practitioner of karate and an avid outdoor sports enthusiast, he was able to regain his training and improve his health.Carlos’ sensei also taught Spinning® classes, so as a way to improve Carlos’ cardiovascular health in a safe, controlled environment, he encouraged his protégé to also take Spinning classes.With his visualization skills strengthened during his rehabilitation, Carlos was not only able to see the road ahead, but to see the victory at the finish line and renew his love of cycling. That enthusiasm motivated him to contribute more and more to the Spinning program. 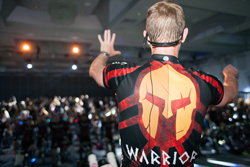 In the twenty-one years since losing his eyesight, Carlos is at one of the healthiest points of his life and now serves as a Certified Spinning® Instructor. His story became such an inspiration to fellow Spinning instructors around the world that he was one of the featured Warriors in Josh Taylor’s Warrior Ride at the 2015 WSSC Conference.“A Warrior is the underdog, the minority that adapts to the world and doesn’t wait for the world to adapt to them,” says Carlos. “That’s why Spinning is so wonderful and why you will find many warriors in the program.”

There’s something important everyone should know. Life is based on limits. But what’s important is that you set your own limits and nobody else sets those limits. Not doctors, family anyone. The only one who knows how far you can go is only you and even then you don’t even know and you can surprise yourself.

In 2011, low-vision Spinning classes began at Gold’s Gym in Torre Bazar Bolívar. At first, filling classes was difficult. But with Carlos’ guidance, instruction and patience, the sessions began to grow.“Exercise is only one part,” Carlos adds. “The real experience is the motivation and the confidence it creates—and it spreads to everyone! The gym owners, other riders now open their classes and accept riders, even riders who are also Certified Spinning Instructors, giving them teaching jobs. As a person with a disability, many of the low vision riders are excluded in daily activities and job opportunities, but Spinning has brought them an opportunity to be included as accomplished athletes and accomplished instructors.”The low-vision Spinning program earned the attention from the Spinning team in Venezuela, and Spinning Master Instructor Tony Salazar visited the Gold’s Gym in Torre Bazar to witness their incredible progress and offer words of encouragement:“Carlos is a powerful rider, his enthusiasm is contagious, his strength shows at the moment he pushes the pedals. But mainly, his strength resides in knowing exactly what the other low-vision riders feel when they start to get the adrenaline rush of pedaling freely, flowing with the music, following his directions and having that sense of independence by doing this ride all by themselves. He’s conscious about their needs, wishes, and emotions. He leads them through it with a very kind touch, a very good sense of humor and with a passion that it will bring tears of joy to anyone in the room.”

Moving Forward with the Low-Vision Program

“Riders are receiving something I didn’t have,” Carlos affirms, “It’s a program now, not a project.” Supported with a team of people who assist riders in their classes and with specific manuals, a program with hand positions and movements grew into a whole new movement that began to spread within four different gyms in Caracas, then to Carrizal, Los Teques and Maracay.The program continues to grow throughout Central and South America, and will hopefully grow in Mexico and the United States, with 6% of the population having low-vision. Carlos also hopes to expand the program to Spain, the nation with the highest low-vision population.

Has the Spinning Program brought you opportunities to be included that you would not have had before? We want to hear from you! Contact us at news@spinning.com to be featured in our newsletter, and subscribe for more inspirational stories about instructors changing lives every day.