By Christina CastanedaLiving in China, Mark Liu had what anyone would want; a simple life with a great status in the community. But when he reached into the “desire box”, he found that the simple life still left him empty. But when he resolved to become a Spinning® instructor and lead others on their Spinning journey, he espouses the importance of the “desire box” and how it is one of his most powerful teaching tools in athletic training.Mark’s first big step in his  Spinning journey occurred when he was invited to Spinning master instructor camp in China in 2010. There, he felt called to a greater sense of fulfillment, so he decided to give up his 12 year career as an architect and committed himself full-time to being a Spinning master instructor in Canada.When Mark packed his bags to continue his Spinning journey, he faced the challenges of a whole new land, a whole new language and even tougher winters. As he worked through each obstacle, he was fueled by his desire because, to Mark, “the desire is the power” that leads opportunity after overcoming each challenge.Last year, Mark signed up to compete in the annual IRONMAN® Competition in British Columbia. After having to withdraw from the race  in 2014 after coming down with an illness, he continued his training in the Spinning program to compete in 2015 at the IRONMAN® 70.3 in Mont-Treblant, Quebec.When it came time for the race, Mark felt “super-fast” thanks to his Spinning training,  and he soon found himself passing the other competitors during the cycling portion. But when he arrived at a water station midway through the race, a volunteer accidentally pulled him off his bike and damaged it. Mark tried to fix it quickly and stay in the race, but he couldn’t seem to get it ready to ride again. After waiting 10 minutes for the mechanic (who at one point said there was no hope of fixing the bike)  Mark stayed patient and refused the drop out of the race. Even though he lost 20 minutes during the repair, he still was able to regain his pace, rhythm, and focus, and he finished the race despite the long setback.  Mark will compete in another IRONMAN event in August 2015, and this time, he’ll be ready if any more surprises come his way, even the ones he doesn’t train for.

While teaching his first Spinning class in Montreal, Mark felt anxious that his riders wouldn’t be able to understand him as a non-native French speaker. So he enrolled at Concordia University and devoted more time to his language study, and after a few years of alternating between studies and instructing, Mark became one of the most popular instructors at his gym. “My life is as simple as it can be,” Mark says, “teaching, training, studying and nothing else, it’s not easy, but our Spinning family loves the challenges!”When doors in his life opened, Mark took advantage and went right through them. “Spinning is the door,” that opened him into another world where he is “searching the secrets of life, discovering myself, and sharing everything I know to everyone, the Spinning way!” 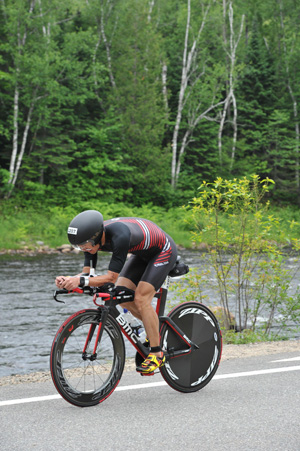 Mark deploys several secret weapons for his riders, and one key tool that he brings to every class is what he has coined, “the desire box”. He believes everyone has a “desire box” within them; it just needs to be unlocked. So how do you unlock a desire box?

The deepest desire is the power. It drives us to finish every single hard training session. It keeps you away from some your favorite food and parties. It disciplines you to go to sleep at 8pm and get up at 5am day in day out. It makes us stronger, it gives us confidence and, finally, we can achieve something incredible.

As one of Canada’s newest Spinning superstars, Mark continues to grow the Spinning program, living out his deepest desires every day by unlocking the potential in his riders.Has Spinning unlocked your “desire box”? We want to hear from you! To find out more from our Master Instructor Team and their secret weapons, subscribe to our newsletter!