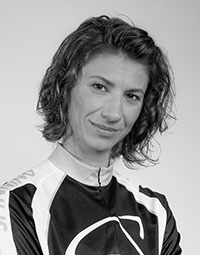 Every nation around the world was affected by the global financial crisis of 2008, but none more so than Greece. But after years of increasing debt, rising unemployment and difficult austerity measures, Greece’s Spinning program remains strong and resolute. In spite of all the economic turmoil in her home country, Master Instructor Lena Georga took it as an opportunity to guide people through the losses in life and lift them up with one of the best antidotes she could offer: sweat, steam and overall happiness.In 2006, the local fitness community in Athens was not familiar with the Spinning program. Lena met with the local fitness distributor, Spyros Touliatos, and desperately tried to convince him that that their customers would thrive with Spinner® bikes and Spinning education. As Lena tried to expand the program, some “bad copies” started popping up in gyms around the country. She worked tirelessly and used Spinning trainings, events and education to demonstrate the program to be more substantial than any cheap imitation. Soon, Official Spinning Facilities started to pop-up all throughout Athens, then  throughout Greece, providing more jobs and “ongoing, steady paced work” for instructors and coaches throughout the nation. As instructors produced more enthusiasts who began to lead a healthier lifestyle, Spinning classes became higher in demand.Growing up, Lena had become accustomed to big personalities and leading with a firm hand. But in order to step out of her strict and rigid coaching style, she discovered that growing the Spinning Program in her home country would need to come from a place of love. She had to show less strictness and more warmth and encouragement to become a stronger instructor. “When dealing with many people, [if you remain open-minded] they quickly show you your weakest points.” Soon, weak points began to appear all around her. As everyone faced economic hardships and increased stress, Lena strived to keep everyone united. This wouldn’t be easy with everyone coming from “a different standpoint and frame of mind”. With the specter of unemployment and austerity measures looming over the country, people became less connected and the sense of community suffered. No one knew how the financial crisis would affect their jobs, families and lifestyles.Lena encouraged her riders and enthusiasts to embrace the unknown and learn from it. “What I’ve learned through hardships is that if you want to go far, you have to go together,” Lena says. Once the community ceased being fearful of matters out of their control, they started making improvements in their lives, and the Spinning program really began to thrive again.These riders continued to benefit from being able to “sweat, let out steam and socialize in the Spinning class room” Lena says. “This is the best antidote to crisis!” The music and the “coach-oriented instructors” provided the physical and the emotional help that riders in Greece desperately needed, helping them to look forward to brighter days ahead.  Not only did these facilities stay in business and instructors stayed employed, but events and new education material began to develop from Greece’s master instructors.Lena continues to her own skills and those of other Spinning instructors by teaching the importance of being coach-oriented. To Lena, this means valuing relationships, hard work and educating yourself so that you can “fill your heart.” For Lena, the quality that you put into your daily life with relationships will make you more motivated to take the small steps you need to leading a healthier, happier life, especially during hard times.

Evolving myself comes as naturally as breathing,” insists Lena. “So working with this in mindset and with persistence, deep understanding, and love, I came to change it. It all starts and ends in us. If I’m happy and in peace with who and what I am, all other obstacles seem really small.

We all find ourselves in times of fear and stress, particularly when it comes to money and finances. For Lena, the choice to continue her growth in Spinning was easy, but the steps she had to take to reach those goals became the challenge. Her journey and success in Greece remind us how important—and difficult—it is to achieve those goals, and to always remember to come from a place of love and enthusiasm.Was the Spinning program the unexpected solution to difficult economic times? We want to hear from you! Contact us at news@spinning.com.Learn more about our courageous master instructor team and subscribe to our newsletter.