By Megan do NascimentoI waited the week of Thanksgiving for the call from my radiologist. I just finished the Spinning® classes that I regularly teach at a female correctional facility in Philadelphia. I tried to stay as active as possible the days prior to my phone call to distract me from what could be a cruel reality. As soon as I finished class, I grabbed my phone out of my locker and noticed a call from an unknown number. I checked my messages, and there was the call I was waiting for. It was confirmed that I had stage IIB Invasive ductal carcinoma, and that the tumor was rather large and aggressive. Later biopsies confirmed that I also had cancerous lymph nodes.I decided to call my family members to give them the devastating news. Looking back, I wasn’t sure why I did that. My two younger sisters and mother were with me during all of my doctors’ appointments. My mother is a breast cancer survivor that was diagnosed when she was only 34-years-old with three young daughters. My next call was my husband. Then I called my mom, dad and best friend. This was all done in the parking lot in the prison, surrounded by tall barbed wired fences with feral cats lurking around. As I drove home, I had to pull over to the side of the road a couple times to get a grip. My next question was "Am I going to die?" I lost an aunt to breast cancer, and it wasn't clear from my doctor’s phone call how aggressive my cancer was. I just had to sit and wait and get all the tests done. 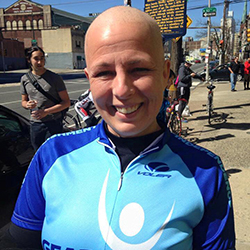 They call it the “cancer dance”; doctor appointments, scans, more tests, more waiting, and more stress. After I got home and made about 100 more phone calls, I realized that I had a Spinning class to teach later that afternoon. My family told me to get a sub, but I said I must teach. Spinning became a stress reliever from day one, and I had tons of it.That day, when I arrived to class and saw the faces of my riders, I started to become teary eyed but I kept it together until everyone was on their bikes. As we were warming up, I blurted out that I was just diagnosed with cancer. Some people started to cry right away, and I then realized that it wasn’t such a good idea to tell them. We kept riding, and I held myself together. ”I will get through this and I need your support. Just being here with me in this studio is enough support.” That was the beginning of my cancer journey on a Spinner® bike.Everyone stood by me during this trying period in my life. I routinely taught eight classes a week before my diagnosis. When I started chemotherapy and was in the middle of my treatment, I often taught up to 11 classes from subbing. Subbing gave me an extra boost. The ladies that I taught Spinning classes to in the prison were super supportive and told me, "We are fighting our own battles against addiction, depression, mental illness, physical and sexual abuse. We aren't that different from you.”One of the main reasons I kept teaching was that I didn't want people to think something horrible happened to me. I wanted to prove to everyone that I was still alive, and just because you’re handed a horrible diagnosis, it doesn't mean that you have to stop living.

I also met other cancer survivors in class. Mark was a man whom I met that had lymphoma. While he received treatment at the Hospital of the University of Pennsylvania (HUP), he had access to the hospital’s Spinner bikes and was able to ride while going through intense chemotherapy. He said it was the only thing that kept him from going out of his mind. Mark opened up to me, and I was shocked to know that he had passed away from a recurrence of the disease. I went to the funeral and cried my eyes out. I didn’t know Mark very well, but felt such a strong connection to him because he used the Spinner bike and also biked outdoors as a way to manage his pain and stress.Almeda and Ola are also cancer survivors that I met in class who I now consider friends. We support one another in so many different ways and we educate other people about staying active during treatment. I call these people Spin Sisters and Brothers.

I also teach one class per month at a local studio. It’s a free class for cancer survivors called "Survival Spin". I have special playlists for these classes, and my favorite song by far is "Beat It" by Michael Jackson. Not all my days were full of fun and smiles. I had some days when I felt weak, but kept going. I felt out of breath, but managed to persevere. After my chemo was finished and I felt stronger, one woman in my class said, “Darn, you must be feeling better because this class is hard and you are kicking my butt." I guess I didn't realize that I was going a little easy on my students.Download the Survival Spinning® Class Playlist 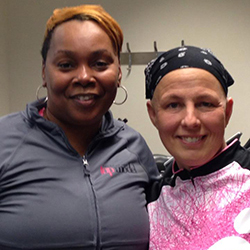 After six rounds of chemo, I had a bilateral mastectomy and had to stop teaching for six weeks. I remember when I was about to be put under, my surgeon said, "Yes, Megan. I know you want to know when you can teach again." Six weeks was hard for me to stay off the bike, but I started walking around my neighborhood to keep busy and active. I went back to teaching exactly six weeks later and sitting on the Spinner bike was a great way to ease back into a fitness routine. My legs were strong and keeping myself upright was strengthening my core.Read more about Megan’s journeyNext week will be the two-year anniversary of my breast cancer diagnosis. I have had an amazing past two years of meeting new people and finding strength inside me I didn't know I had. In July, I finished my yoga teacher training, and this past weekend, I rode 246 miles in Tour de Pink with the Young Survival Coalition.I am now a part of a walking group with Living Beyond Breast Cancer and planning my first yoga retreat for breast cancer survivors that is happening next weekend. If I can beat breast cancer, then nothing will get in my way!Has Spinning helped you cope with breast cancer? We want to hear your story! Contact us at news@spinning.com or subscribe to our newsletter for more about our courageous instructors.