Hear the incredible journey of Staff Sergeant John “Sarge” Stone, an armed forces veteran and first-responder who overcomes trauma with the help of Spinning® and fitness.

On the night of June 25, 1996, a truck bomb exploded outside of an apartment complex in Khobar, Saudi Arabia. The complex housed members of the United States military taking part in Operation Southern Watch. Among the first-responders was Staff Sergeant John Stone, who joined the Army two years prior after serving time in the Navy.

“I responded down to the aid station and we started treating folks,” John recalls. “I think we treated over 300 patients that night.”

John has always had a heart for the military and emergency service. After three years in the Navy, he worked for six months as an EMT in the Atlanta area. “But after six months,” John confesses, “I realized I didn’t want to be a civilian anymore. So I joined the Army in the fall of ’94.”

Following deployments in Saudi Arabia and Germany, John returned to the United States and worked as a volunteer firefighter in Ashburn, Virginia. He earned his Firefighter Certification and was on-shift many nights, weekends and holidays. But five years after the Khobar bombing, he responded to the second terrorist attack of his career.

On the morning of September 11, 2001, a hijacked plane slammed into the side of the Pentagon. 189 people perished in the attack.

“After that, the effects of post-traumatic stress disorder severely grabbed me,” John says. A few years later, he moved to southern Florida, but his physical and mental health took a steady decline.

“It took about 10 years to realize I had PTSD,” John remembers. “I had gone through all of the classic symptoms or traits. I had secluded myself. I had buried myself in work. I was big into video games, most of it was all avoidance and seclusion. I got up to 305 pounds. I was dealing with a lot of depression and anxiety.”

Sarge credits his sons and the doctor with first helping get his physical health back on track. “I had gone in for a physical, and I had gotten eight prescriptions for high blood pressure, and anxiety. He said, ‘You’ll take them or you’ll be dead in a year.’ I realized in that moment, I had to do something to change my life.”

While exploring ways to get some physical activity back into his life, John remembered loving to ride his bike as a kid. He went to his local Y and tried his first indoor cycling class, but he soon realized the importance of a good fit and a quality instructor.

With a brand new bike and a perfect fit, John set off on a new workout program. He started completing group and solo rides three-days a week with an ambitious goal in mind. 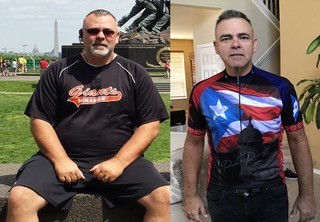 “My goal was 100 pounds, 100 miles in a year,” John affirms. “I wanted to drop 100 pounds and complete a century ride in one year. The weight was coming off dramatically, so I did just that.”

John reached his goal, but with more work and travel potentially hindering his incredible progress, he started to train indoors. He rejoined a Spinning® class with the proper setup, and his instructors even offered ways to modify his fit for his next big event.

His newfound fitness routine not only improved his physical health, but his mental health as well.

“During this entire process, I realized that the therapeutic side and getting out of my own head of a couple of hours,” John says “I still get that same therapeutic journey indoors. It’s been a big part of the recovery.”

Now John is hoping to improve the lives of other veterans and first-responders through his experience. He just earned his  Spinning® Instructor Certification and intends to start leading his own classes soon.

“Participating in Spinning® and getting to share my journey, even if I’m not part of their story, I get to plant that seed. My goal would be to build credibility. I’ve got the certifications, so now I’m ready to put a program together.”

John is also part of the Broward County Critical Incident Stress Management Team, serving first-responders who come back from serious incidents and walking them through a guided process of what they may experience over the following days and weeks. He has also started his own podcast, “Yucked Up,” where he interviews fellow first-responders and offers resources for those suffering from PTSD.

He aspires to aid fellow veterans through the power of fitness. He understands that every story is different, but he hopes that his improved physical and mental wellness can inspire others who may be suffering to seek help.

“There’s no antidote for PTSD, but it is one of those things where you learn to cope with and minimize its effects,” John concludes. “And that’s where the fitness and Spinning® comes in. Vets with PTSD go into a depression because we’re Type A and lead from the front kind of folks, but then PTSD gets a hold of you and dogs you. But fitness builds up your confidence. You feel strong and whole again.”

We are incredibly honored to be a part of John’s journey. You can follow his journey @SargeJohnStone on Twitter and subscribe to the Yucked Up podcast here.

This article was contributed by Greg Mantell, Director of Content Management.