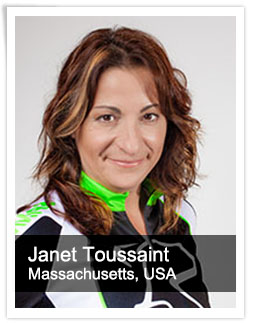 Janet first discovered Spinning® at a fitness conference in 1995. She was immediately drawn to the bike, the teaching style and the music, and worked to bring the program to the Boston Athletic Club—the first club in New England to feature Spinning. As soon as they had the bikes, Janet got certified and began teaching right away. Nearly 20 years later that initial enthusiasm and excitement has only grown stronger.Janet loves everything about teaching Spinning classes and training new instructors, but the thing she loves the most is that “the bike is a medium between the coach and the student. The coach has this ability to reach deep into the student’s mind and body, to train, to motivate, to encourage, and mostly to guide the students to places they may have never been within their own bodies. The ability to touch and to change peoples’ lives is what I love most about being a Spinning instructor.” She likes to tell hopeful instructors that they should be prepared to deeply affect peoples’ minds, bodies and lives—and that they should embrace that and enjoy the journey!An avid road rider, Janet is also a Power Specialist Master Instructor for the SPINPower® Program, an ACE and AFAA certified personal trainer and a Registered Yoga Teacher. She regularly teaches Spinning continuing education workshops around the country.

It brings me huge satisfaction and gratitude knowing how many people I have been able to touch via Spinning—and that those people have been forever changed because of their experiences. Some were students in my classes, who still to this day reminisce about their times in my classes and tell me they have never experienced anything like it. I also inspired by the instructors I’ve had in my Spinning Instructor Trainings, who have been so passionate about the program that they, themselves, went on to become Master Instructors. I am so grateful that I’ve been able to contribute to their journey in a positive way.