SPIN® Life Blog
Bikes Gear & Accessories
Spinning® Cross-Training Stretching & Recovery
Global Events Success Stories Master Instructors
By Kate AmosWhether you’re cresting mountain passes on a road bike, bouncing over city-center cobblestones on a hybrid bike, screaming down single track on a mountain bike or just coasting along the beach on a cruiser, there’s no better way to explore the world than on two wheels. With gas prices still high and urban centers becoming increasingly crowded, many cities are developing, improving and maintaining bike infrastructures, making the bicycle the preferred method of transit for locals and tourists alike. Nearly all of these cities feature bike-share programs, making it easy to borrow a bike for an hour or a few days. You can also bring your own bike along with you on the plane or simply rent one from a local bike shop once you arrive at your cycling-friendly destination. 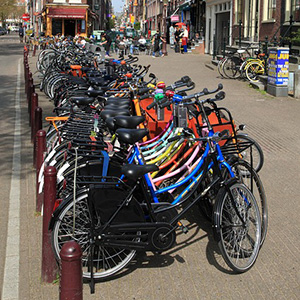 Amsterdam practically defines what it means to be “bike friendly” in the 21st century. Home to more bikes than people, over 60% of trips in the inner city are made by bike, and for good reason. Amsterdam, like the Netherlands as a whole, features flat terrain, a comprehensive bike path network, convenient and safe bike parking and a culture that celebrates life on two wheels. Whether you take advantage of one of the many bike tour groups or strike out on your own, the bicycle is the perfect way to cruise along the canals as you explore Amsterdam’s many museums, castles and festivals.

Modeled on Copenhagen’s extensive bike path network, Nagoya is leading the way towards a more bike-friendly Japan, building fully-protected bike lanes on some of Asia’s busiest streets. Nagoya is centrally located, making it a great home base for exploring both Japan’s other big cities as well as its stunning mountains. Japan’s wealthiest city, Nagoya offers everything from ancient shrines and castles to glitzy modern department stores—and don’t forget to sample some of its famous regional chicken and eel dishes.

Every Sunday, the streets of Bogotá are closed to car traffic and converted into an urban paradise for cyclists, runners and skaters. Over 30% of the city’s population participates in the “ciclovía,” an incredibly successful model that also features everything from concerts to yoga and has been copied the world over. Bogotá also boasts of one of South America’s most comprehensive bike path networks, making it easy to explore this treasure trove of art galleries, cultural events, incredible cuisine and, of course, world-famous Colombian coffee.

Don’t let New York’s status as one of the world’s largest metropolises fool you—hop on a bike and you will discover a small-town feel in the heart of the urban jungle. From the protected West Side Highway and Hudson River bike paths to the massive and innovative Citi Bike bike-share program, the Big Apple is constantly developing and improving its cycling infrastructure. Whether you are looking to catch a Broadway show or just take in the view from the Brooklyn Bridge, hop on a bike to find the best of what “The City” has to offer.

Australia is a hotbed of recreational and professional cycling, producing many road, mountain and track superstars. Located in Western Australia, Perth is a fantastic destination for hard-core roadies looking to hit the hills, daredevil mountain bikers seeking wild single track, and sun-seeking vacationers hoping to work on their tans. Tour along the stunning Sunset Coast, pedal over to one of Perth’s pristine beaches for a relaxing afternoon in the sun, then head back into town to sample its vibrant local music scene.

This charming French-speaking city located on an island in the St. Lawrence River is one of North America’s top bike cities. With bike paths that date back to the 1980s, Montreal is no stranger to the bicycle—its residents use bikes for everything from hauling small cargo deliveries to hitting the downtown night clubs. Visitors will find no shortage of attractions, especially in the summer months when Montreal is host to a wide variety of street fairs and festivals.

Copenhagen often vies with Amsterdam for the title of the most bike-friendly city in the world. Like the Netherlands, Denmark features flat terrain, dense cities and a well-designed infrastructure, so it’s no surprise that over one-third of its citizens commute to work by bike. Visitors will find that contributing to the nearly one million miles cycled daily is the ideal way to see everything from the Tivoli Gardens to the Christiansborg Palace to the Strøget Shopping Mile and the Christiania “freetown”.

A relative newcomer to the bike-friendly city scene, Cape Town is rapidly developing its bicycle infrastructure. One of the most multicultural cities in the world, Cape Town is well-known for both its cultural attractions and its stunning harbor. Head down to the beach to catch some epic waves or ride up to Table Mountain to explore one of the most biodiverse cities in Africa.

While its harsh winters may seem like the opposite of bike-friendly, Minneapolis is consistently ranked among the top cycling cities in the United States. Cycling has been extremely popular in Minneapolis since its founding, and its bicycle culture has only grown stronger. Home to the popular Nice Ride bike-share system, as well as the country’s first “bike freeway,” traveling on two wheels is the ideal way to get a Twins game, the Minneapolis Sculpture Garden, or one of the city’s many parks, green spaces, coffee shops and art galleries.For more ideas for your dream vacation, subscribe to our newsletter today!
×