An Inside Look with Spinning® Vice President of Design, John Cook

Spinning® is proud to unveil the new Active Series line of home Spinner® bikes, and if you have been patiently waiting for a high-quality home bike that provides studio-grade quality, you’re in for a treat. Each of the four bike models in the Active Series was carefully designed and meticulously engineered to provide active individuals with a truly authentic home ride, reminiscent of the studio experience. Set to release this April, home workouts are about to get a significant upgrade.To give you an idea of what to expect from the new Active Series, I sat down with John Cook, vice president of industrial design for Mad Dogg Athletics, Inc., creators of Spinning®. Beaming with excitement, John was all too happy to dive deeper into the details and share what makes them so special. Also, with the very first bikes having just arrived at Spinning® headquarters, he was kind enough to give us a firsthand look as he unboxed them. Check it out in the video below:

Get a Studio Quality Experience at Home

“The idea was to add some elements of our commercial bikes – their rigidity and durability – into our new Active Series home bikes,” he said. “We’re offering commercial performance and attributes in a bike that’s tailored for the home,” Cook said. “We specified a 40-lb. flywheel, so it’s only slightly lighter than our commercial series, but still perimeter weighted with fantastic inertia,” he said.Cook explained what specific parts were given studio-grade enhancements: 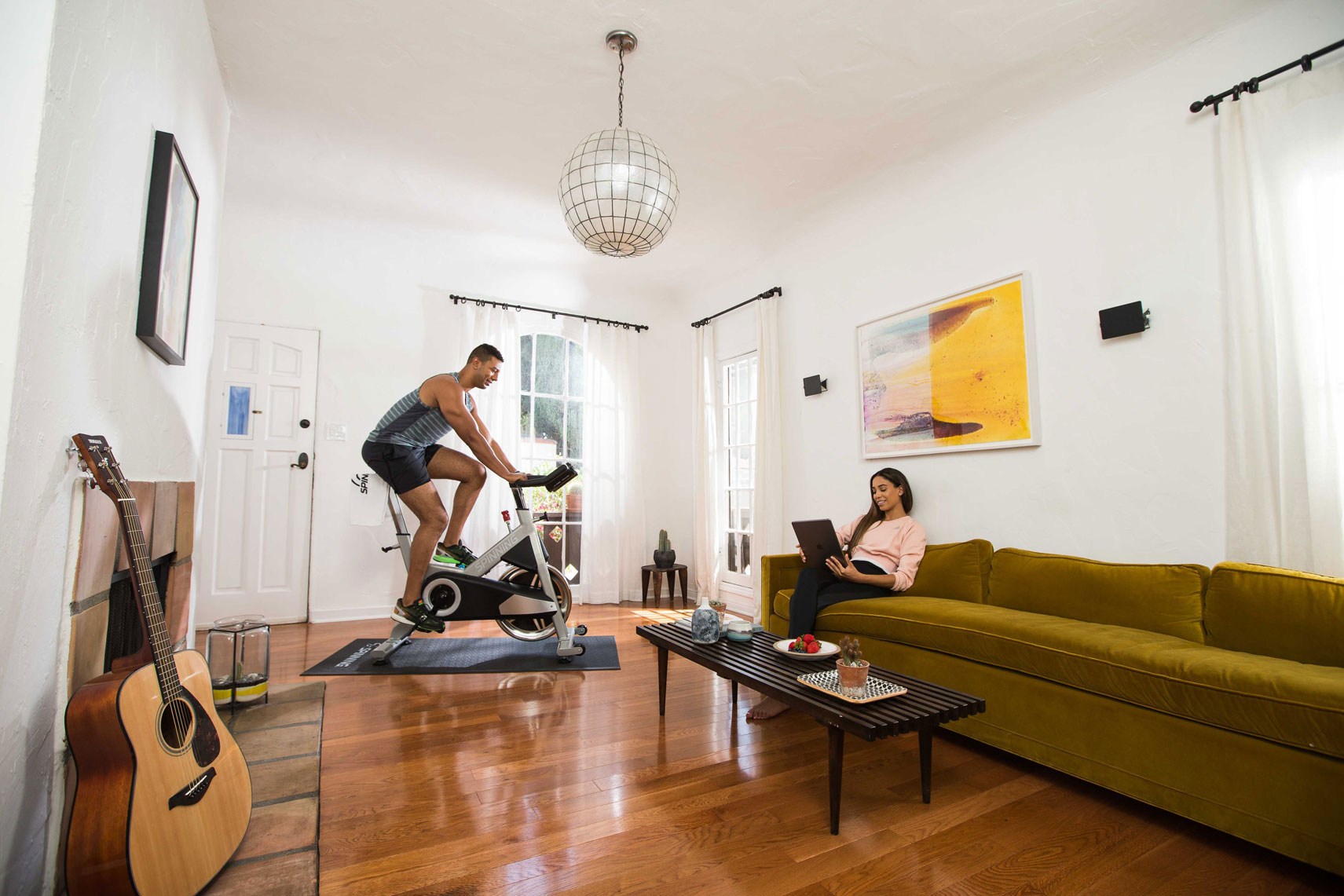 Designed to Mesh Well with Your Home Décor

With over 30 years of experience as an industrial designer, crafting everything from commercial fitness equipment to luxury sports car products, Mr. Cook has no shortage of experience making fast-paced products elegantly synchronize in an everyday environment. With an eye toward aesthetics, he and his team took extra care to design these bikes to mesh perfectly within a home environment. “It’s in your home, so you’ll notice on the Active Series bikes that the graphics are detuned. Everything is silver on silver, so there’s less contrast, and that’s because it’s in your house, it’s not in the gym,” Cook said.Going further into detail about the home-friendly appeal of these bikes, Cook emphatically pointed out the bike's beautifully polished flywheel. “We show more metal than most bikes, well, because it just looks good,” he said. “Everything toward the user is soft and smooth. The saddle is soft, so is the shape of the tubing. Everything that’s toward the user is soft, smooth and approachable.”

Bringing home key elements of the studio experience also meant a few structural enhancements, including using heavy duty custom formed steel pieces for adjustment sliders, a difference that you may not see on the surface, but that improves the overall durability of the bike.Bringing that durability into a home bike didn’t stop there though, as Cook and his team needed to special order the production of a proprietary piece of steel for the frame that was designed exclusively for Spinning. “We designed our own tubing to do it,” Cook said. “You can’t get this [anywhere else]. We had a factory actually build our own tubing for it.”“We’ve made some changes to some of the shapes of our posts to reflect more of the performance attributes that we have on our commercial bikes,” he elaborated. “So, when I say the shapes of things, - the vertical sliders and the posts – we’ve redesigned those to be wedge shaped, which means when you tighten your resistance or tighten the pop pin down, you’ve got real rigidity in the bars. Things aren’t moving side-to-side. It’s a very robust connection.” 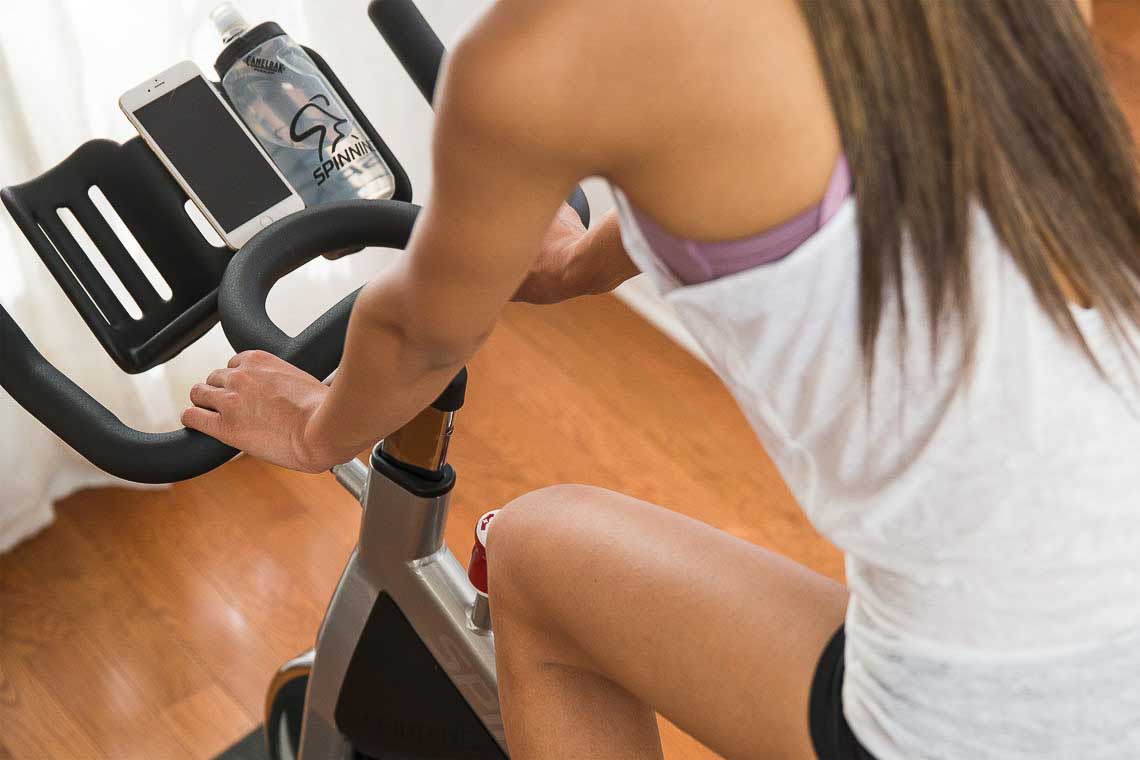 The Active Series is not the only line of Home Spinner® Bikes available –  the Lifestyle Series and Performance Series are also available – but it is the first series built specifically for those who appreciate an active lifestyle, thus the name. More specifically, “These bikes were designed for people who like to stay fit and are familiar with our [Spinning®] classes,” Cook said.However, designing a bike that provided the ideal durability, maneuverability and functionality for such an energetic and devoted crowd was no small task. To meet the training demands of active users, a wide range of optimizations that added to these bikes durability had to be implemented because, as Cook told me, “You just don’t want to let our customers down.”

The Active Series bikes were designed to enhance the ability to easily move and store your bike anywhere in your home. To make that happen, Cook and his team took special care to upgrade the parts that made home maneuverability easy and ding-free.“We take great care with the placement of those wheels,” Cook affirmed. “We’ve got these easy transport wheels on the front,” Cook pointed out. “Where these are placed, they’re placed in such a way so that just as you tip the bike back, the wheels engage."While the placement of the wheels might seem minor, Cook clarified why that wasn’t the case. “If they engage too late, then you’re pulling too far up. If they engage too early, then the bike skates towards you.”The feet were a point of emphasis as well. “We’ve brought the commercial features of the feet to this new line of bikes.” Cook added. “The feet are oversized glass reinforced nylon with co-molded rubber for non-marring grip with easy adjustability. The glass reinforced nylon gives them anti-corrosion properties as well.” 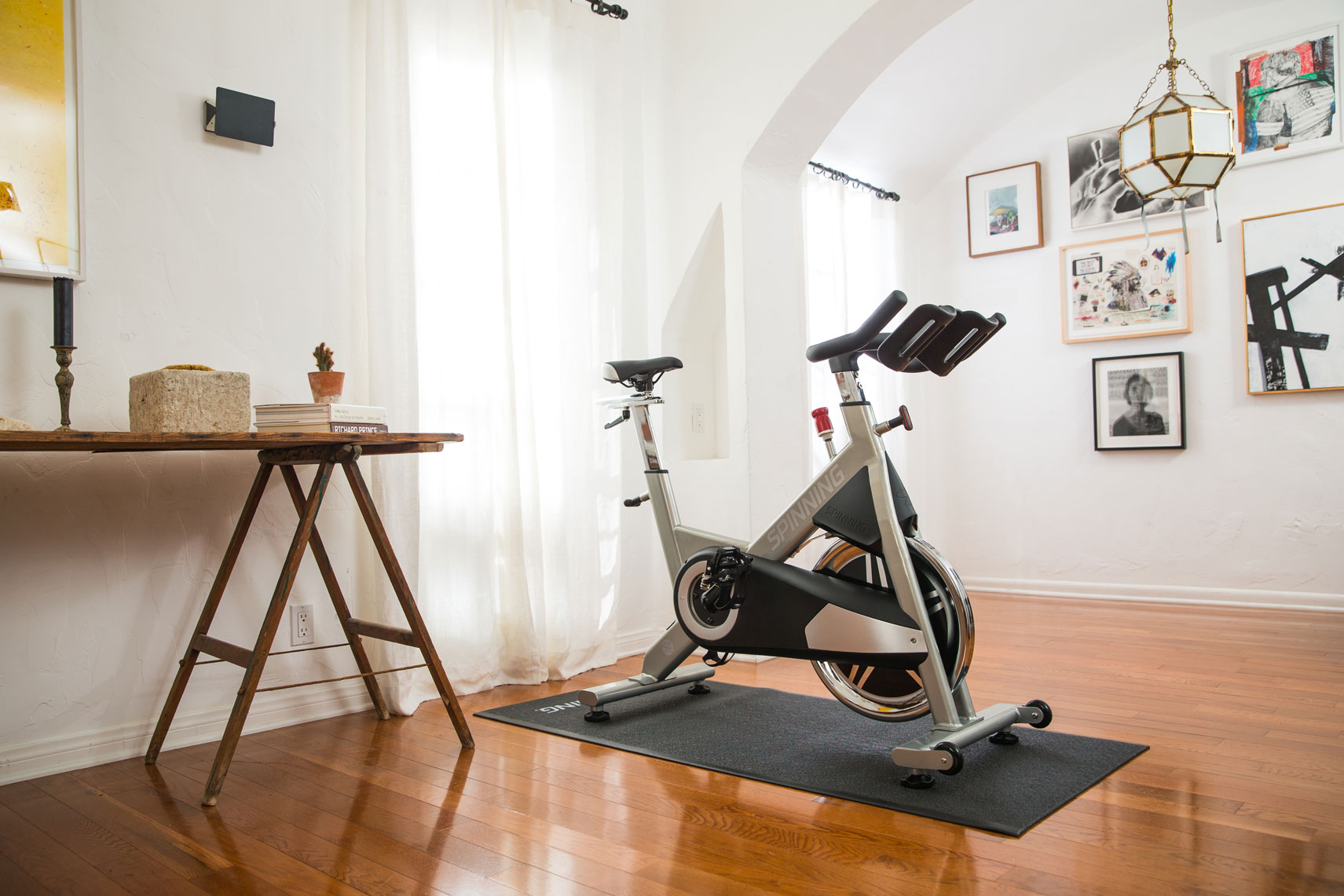 An Eye Toward Sweat Resistance

Even if you love the feeling of a good sweat session, no one is a fan of the ensuing moisture damage that it can cause if ignored. Luckily, Mr. Cook is committed to his craft, going as far as taking pictures of sweat patterns that were left after Spinning® classes. Based on those patterns, he determined that other indoor cycling bikes had not given enough attention to the front of the bike, where most sweat actually ends up.One specific adaptation Cook made to the front was on the fender system. “That bone line on the fender helps sweat go right down the fork,” he said. “If you handle that [sweat] through fender systems, then you can keep the bike looking good while people are sweating all over them.”

Attention to the Finer Details

Even the finer details were given special attention on the Active Series. Yes, they could have left them alone, but that’s just not John Cooks’ style. One such example is in the top of the handlebars, which is rounded. “Why is that?” you might be wondering.“One of the features we have that people don’t even pay too much attention to is the ends of the bars, which are rounded. When our Master Instructors rode the bikes, they made a big point of saying, ’You know you ride like this (putting their hands on the top of the bars), but sometimes you put your hands over the ends, and it’s got to be smooth. It’s got to be rounded. If it’s flat it doesn’t feel the same.”Cook also teaches Spinning® classes twice a week at a local studio where he gets feedback from his students.“I tested [the Active Series] flywheel in the studio where I teach, and people loved that bike, they loved the way it felt. They said it felt just like the commercial bikes.”

The Active Series offers three primary models in the A5, the A3 and the A1 Spinner® Bikes. There will also be one limited-edition bike offered: the Johnny G Spinner® 25th Anniversary Edition.

Want to be notified when the Active Series becomes available? Click the link below, select a model and provide your email to be among the first to know when it hits the market.