Spinning® offers us the chance to change and recover, but for Diane Laird of DNA Fitness in Ventura, California, Spinning brought her in contact with the people that would change her life.Working her 9-to-5 job as an Insurance Agent, Diane went about her daily life as a working mother until 1997, when she was diagnosed with endometriosis. Each day, she began to feel weaker and hunched over in pain, unable to cope with the changes in her body. The pain began to slow down and even stall the pace of her busy life.A close friend, Irma St. John, ran small Spinning classes from her garage, before Spinner® bikes started appearing in every gym. With only five bikes in Irma’s garage, Diane started attending her friend’s class two days a week until she had a hysterectomy a few years later.In 2004, when the struggles of work and raising a family began to wear her down, Spinning classes every morning became her therapy. “It was exactly what I needed to cope and it helped me play on my strengths,” Diane says.Diane’s health declined again in the summer of 2011. With pins installed in her spine, Diane underwent a full back fusion. But even with pins, stitches and physical therapy, Diane had only one question for doctors; “Can I ride yet?”One month and three days later, Diane’s doctor cleared her to take Spinning classes again and said that they “never saw anyone come back from a full fusion like you.” Diane’s regular Spinning classes kept her fit with a healthy heart and healthy mind, and she avoided a more painful and prolonged recovery period.With some additional free time after her physical therapy, she decided to add an early afternoon Spinning class to her routine. Her Spinning instructor was Alex, who she met back in 2006. Diane felt that Alex's classes were “therapy” after her rocky previous marriage ended; Alex had always delivered intense workouts and supported Diane’s training and fitness goals. After class, they decided to meet up again, and nearly three years later, they’ve been inseparable ever since. 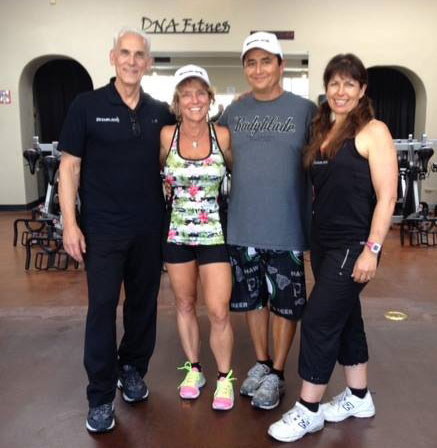 In January of 2014, Diane faced another medical scare; a near-bout of breast cancer. Thankfully, she was not diagnosed, but after undergoing two major surgeries and coping with pain in the past, Alex and Diane decided it was time to put their dream into action and start their own business. With Alex’s support, Diane was ready to leave her career as an Insurance Agent, a high-stress job that she had for 16 years, and start her company from scratch.Diane has two loves: coffee and Spinning. But the critical factor for her is her morning workout. If she ran to a coffee shop in the morning, she would have to give up her early morning rides and force herself to ride in the evening. So Alex and Diane went into business together and opened DNA Fitness in Ventura, California (DNA is for Diane and Alex) on February 24, 2014. Thankfully, she no longer has to sacrifice her morning ride for her morning coffee!Before the grand opening, Alex worried that the couple would have less time together, as they would be busy running the studio, leading classes and increasing membership. So before the opening, the couple went on a quick trip to Hawaii, where Alex proposed to Diane. The happy couple was married on May 24, 2014.Since DNA Fitness opened its doors in February 2014, they now have over 100 members, twice as many as they anticipated. “I know everyone by name,” Diane says. “Here, it feels like a warm family. When every person comes in, they feel at home right away. Even first timers get introduced to instructors and other riders, they even get a round of applause after their first class.”With nine instructors and a “first week free” special, riders usually sign up for membership before the end of the free week trial.The riders at DNA Fitness feel so comfortable with each other, they strike up conversations and develop close friendships with people they would normally never have a chance to meet if they were not going to Spinning classes. There have even been “sparks” between a few sets of members, and when these sparks ignite, “it gives them a boost,” Diane says.To reflect on what these encounters in Spinning classes have done for Diane, Alex and other members, Diane and Alex hang a picture with both of them riding their Spinner Bikes, encouraging riders that a “couple that ride together, stays together.”Have you met your significant other through Spinning classes? How has Spinning been your therapy? Tell us your story! Contact us at news@spinning.com and write “Community” in the subject line. You could be featured in our next newsletter!