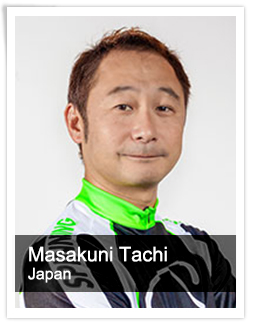 A professional endurance and downhill mountain bike racer, Masakuni Tachi first started taking Spinning® classes to improve his performance on the dirt. Spinning had such a great impact on his outdoor cycling that he decided to become a Certified Spinning Instructor in 1996. He went on to become a Master Instructor because he wanted to convey the benefits of Spinning to the largest possible audience, especially in his country, Japan.His favorite aspect of teaching Spinning classes is the sense of unity he feels with all of his riders. He loves to incorporate traditional Japanese music into his classes, integrating it with other music from all over the world, especially “Anthem,” by Ronan Hardiman, which was the first song that made him cry while riding in a Spinning class.He believes that Spinning is such a great workout not only because it is fun, but also because of the integration of heart rate monitoring and the Energy Zones™, which allow rider’s to use a true training system to develop high levels of fitness. Even though English is not his native language he feels he connects with riders in every one of his classes.In addition to being a downhill champion in the Kyushu area and a national team member for the Masters World Championships in downhill mountain biking, he also directs mountain bike races. He is a personal trainer for professional boxers, a riding and pedaling skills advisor, and a conditioning and strength trainer for Body-Architect.

“Your experience will change somebody’s life.”