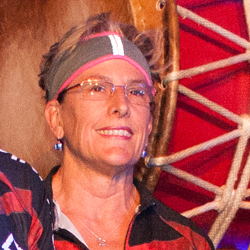 In 2009, Sue L’Africain was diagnosed with thyroid cancer. After surgery and treatments with radioactive iodine, she beat cancer the first time.Sue has participated in Spinning® classes since 1998 and has fallen more and more in love with the program with each ride. Each Spinning class became a method to cope with stress. Sue says she is “not a traditional meditator”, but Spinning became her best medicine—and escape—that she needed to overcome her obstacles.In 2012, Sue had another surgery to combat uterine cancer, and this prompted her start living for the things that make her–and everyone else around her–happy. She put her focus into health, fitness and leadership and made plans to live out her dream teaching Spinning classes at her own studio. In 2014, her brand new studio in Vinalhaven, Maine was open for business.

Sue’s inspiring victory over two bouts with cancer, as well as the success of her facility, earned her a spot as a featured Warrior for Josh Taylor’s Warrior Ride at the 2015 WSSC Conference.“You just don’t give up until it’s done,” Sue says “A warrior is being a leader, and it’s nice to lead people in different ways to get stronger and healthier.”

Although Sue was already a confident person, leading riders through a class, especially when “they’re counting on you to create something for them,” generated obstacles of self-doubt and performance anxiety. “I really want to deliver a quality experience to every individual and its challenging,” Sue says. Finding the right ratio of variety, intensity and quality without sacrificing too much of herself is a continuous learning process for Sue. But the more she is balanced, the more she can remain strong, fit and determined—now the official mantra for Vinalhaven Fitness—her riders can be inspired to do the same.

What’s Next for Sue L’Africain?

Vinalhaven Fitness in Maine celebrated their first anniversary with their eyes on many more years to come on their Spinning journey. While at WSSC Conference, Sue is expanding her knowledge base with kettlebells and other group and prop-based classes to offer more programming at her studio. She has to challenge herself “so they can learn more and grow,” and that is one of the keys to a successful business.Are you a traditional mediator? Has Spinning been your best medicine? We want to hear from you! Contact us at news@spinning.com or subscribe to our newsletter!
×