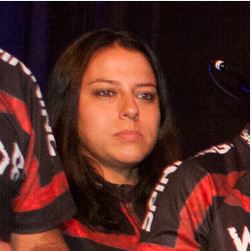 In May 2014, Lexi Rendon Palmer set a goal to lose 85 lbs. But two months in, she stood on the crossroads, “stagnant and unhappy,” not knowing which path to take to help her get to her ideal weight and ideal health. She had kicked her addictions to junk food and nicotine, but she knew she needed something more fulfilling.In July 2014, Lexi took her first Spinning® class at her local gym. She was already 15 lbs. lighter then when she began her weight loss journey, but she was still feeling anxious about where to turn next. But on the bike, she was able to close her eyes, not worry about what was in front of her, and immerse herself in the mind/body connection that the Spinning program provides. “It became very natural,” Lexi says, “just to be able to feel the emotions and how they are released.”Lexi admits that, for a long time, it was easy to “forget about oneself and forget how to understand, how to defog.”, But when she could reconnect, she was able to “develop answers, a solution and a plan.”As she continued her Spinning classes and burned off more and more pounds, Lexi became stronger. That strength became “applicable to all facets of life,” Lexi says, “that inner peace and strength to go forward and be clear headed to go on with your life is a gift I haven’t been able to find anywhere else.”

Lexi’s journey and her mission to promote inner peace earned her a spot as a featured Warrior for Josh Taylor’s Warrior Ride at the 2015 WSSC Conference.“A warrior is someone that continues to go forward,” says Lexi. ”No matter how hard it gets, no matter what obstacles are in front of you, it’s the relentless determination to succeed. It doesn’t mean that you’re going to, but its having the blind faith that it’s going to work out no matter what.”

In April of 2015, Lexi became a Certified Spinning Instructor and began to substitute classes at her local gym. She’s already encountered the challenges of teaching, especially with a triple whammy of new riders who have never been to a Spinning class before. But the priceless rewards of teaching Spinning classes are when she takes 60 minutes away from daily distractions and guides riders as “they’re working hard and in constant motion and that they’re able to find an inner peace.”

While the continuing education remains the main draw of the WSSC Conference, Lexi’s favorite moments of this year’s conference was to reunite with the master instructors who trained her, Donna Minotti and Tami Reilly, as well as making new lifelong friends by joining the Soul Sistas, a new group of female instructors. New friendships and connections made her so overjoyed, as Lexi says, “I could explode from the inside right now because of the gift I’ve been given to meet these people is unfathomable.”Did Spinning guide you out of a crossroads at a time you felt lost? We want to hear from you! Contact us at news@spinning.com or subscribe to our newsletter.
×