SPIN® Life Blog
Bikes Gear & Accessories
Spinning® Cross-Training Stretching & Recovery
Global Events Success Stories Master Instructors
By Christina CastañedaWhen Carlos Uribe was invited to his first Spinning® class by a friend, he was skeptical. As a hardcore mountain biker, he thought he should be out in the wilderness, not “in a room looking at walls.” But after getting off the bike three times, he realized that Spinning classes offer more than just a ride. It could be a catalyst for a whole new life. 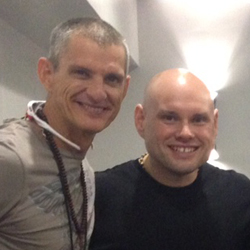 Although he went mountain biking every week and participated in some races, Carlos weighed over 250 pounds. Suffering from cardiovascular problems and high blood pressure, each Spinning class he took afterward made his breaths less agitated and more connected, his blood pressure and heart beat dropped, and he lost over 100 pounds. He continued to see better health benefits, but he soon realized the real benefits  of the Spinning program.Carlos’ transformation won the attention of everyone in his club, including the owner, who encouraged him to become a Certified Spinning Instructor. Carlos remembers the owner telling him that he was “living proof that Spinning does work” when she noticed how his journey could inspire others.When Carlos first began teaching, he feared being judged or not motivating his riders to the best of his ability. Instead, Carlos’ riders continued to show their support and offered encouraging words after every one of his classes. That energy and enthusiasm from his riders motivated him more as a competitive cyclist. In 2005, Carlos participated in his first World Cup racing experience at the UCI World Cup in Angel Fire, New Mexico and finished 6th.

Carlos’ inspiring story and competitive drive to continue racing earned him the spotlight as a featured Warrior in Josh Taylor’s Warrior Ride at the 2015 WSSC Conference.“I think a warrior is somebody that doesn’t’ give up,” Carlos said, “that faces a challenge, keeps working, keeps going at it, and I don’t know if they reach their goal. But as long as they keep fighting, that’s a warrior for me.”After finishing as a top contender in his first race, Carlos continued his training and signed up for even more events, and in 2007, he won his first race. But Carlos doesn’t just train and lead Spinning classes for his own benefit. Many of the riders in his class  are also competitors in cycling and running competitions, and when Carlos sees “how they exceed their goals, it’s all gratifying.” he says. “The compliments, people enjoying their class, people noticing changes in their lives, that’s enough for me.”In addition to advancing his career as a Certified Spinning Instructor, Carlos also spent his time at the WSSC Conference to earn more certifications like the Ugi® Instructor training and take various workshops to learn fresh, new ideas for his riders.Did the Spinning program help you become a top contender? We want to hear from you! Contact us at news@spinning.com or subscribe to our newsletter.
×